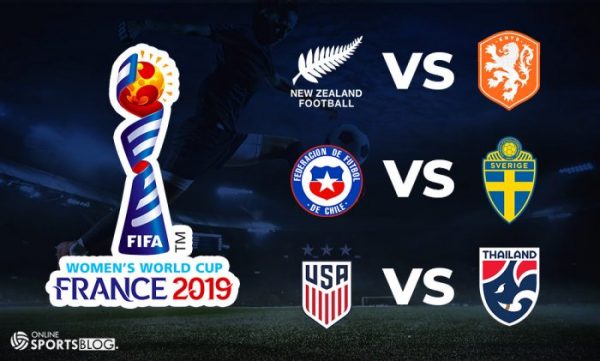 With already four days of matches gone by in the Women’s World Cup in France, almost every group has had matches played by each of the teams.

Canada narrowly defeated Cameroon with a 1-0 win yesterday while Argentina were surprisingly held to a draw against Japan at the Parc des Princes.

The South Americans had lost all six of their previous matches at World Cups, shipping 33 goals, but they were resolute in the first stalemate of the tournament.

Day five is up next today and here is a brief preview of what one should expect.

New Zealand and the Netherlands will go head-to-head for their first match in Group E this afternoon at Stade Oceane in Le Havre. Euro 2017 winners Netherlands will look to confirm themselves at this year’s big event being held in France.

However they will first have New Zealand in their way for what is expected to be an entertaining encounter.

New Zealand have failed to win any of their 12 previous World Cup games with 3 draws and 9 losses making them the nations with most games played without a win.
Similarly, the Netherlands’ only victory in the finals came at the 2015 tournament against New Zealand in their opening game.

Miedema has shown everyone why she’s one of the best players in the world after a stellar season with Arsenal where she was top scorer in the Women’s Super League with 22 goals and 10 assists in 20 matches played. She was also named Professional Footballers’ Association Player of the Year in April.

The second match of the day will see Chile go up against Sweden at Roazhon Park in Rennes for the first fixture from Group F.

Chile have lost six of their last eight matches with the other two ending in ties, and their last victory was the 3-2 win over Australia in Sydney in November 2018.

During the last World Cup edition in 2015, Sweden failed to win a game, making it the first time they’d gone through the finals without a win. The Swedes had tied their three group games before a 4-1 defeat by Germany in the last 16.

She might not be the fastest player on the team, but her excellent defensive and midfield qualities helps Fischer stand out when compared to the rest of her teammates.

How about equal opportunities? Defender @fischer_nilla takes a stand for women's football in our latest episode of Stories From Sweden: https://t.co/RzyttujAxG

Fischer was pivotal to German side Wolfsburg throughout the past season with them able to win four league titles, five German cups as well as a Champions League trophy over her six seasons at the club.

Defending champions USA will kick-start their World Cup campaign in France tonight when they take on Thailand at Stade Auguste-Delaune in Reims.

The two sides have only met once previously and that was in a friendly match which ended 9-0 in favour of the World Champions back in 2016.

We've got a #FIFAWWC kind-of-Tuesday.

USA have been outstanding on their way to the World Cup with them able to win all their five games in qualification and scoring 26 goals in the process.

USA head coach Jill Ellis could become the first person to win the World Cup twice as a coach, having been also in charge in 2015.

The “boss”, as Alex Morgan is introduced at Orlando Pride home games, registered her 100th international goal in April and at the age of 29 arrives in France at the peak of her powers.

In 2 days we will be kicking off right now…. arriving fashionably late to the World Cup. LFG!!

Her status as one of the most recognised American players of her generation was underlined by her inclusion in Time magazine’s 100 most influential people for 2019.

Wimbledon puts an end to marathon matches with new rule