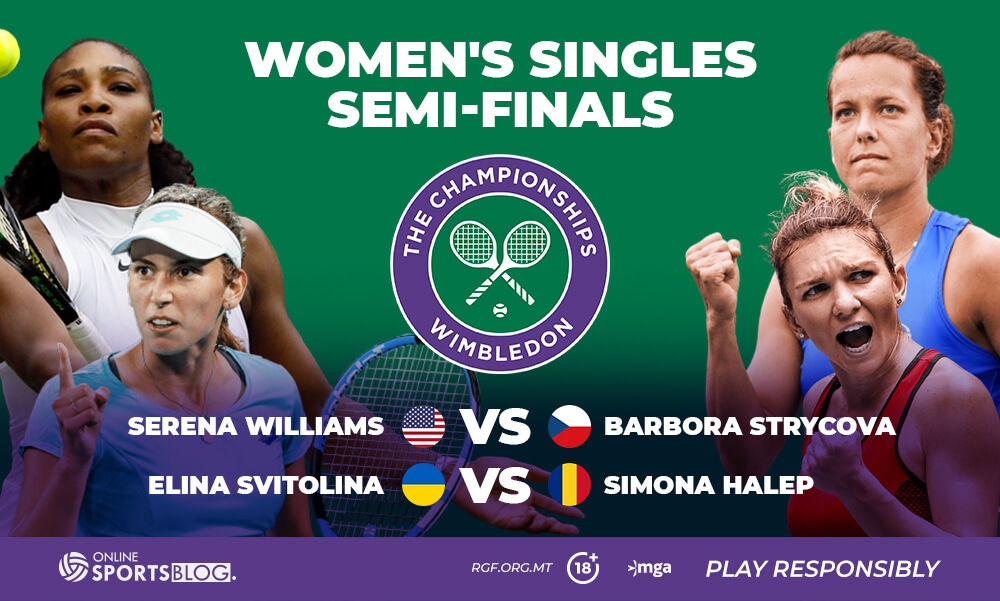 The 2019 Wimbledon Women’s Semi-final is out.

And we’re here to break down these exciting matchups!

🎾 This will be an interesting #Wimbledon Semi-final!

Seven-time champion Serena Williams will take on Barbora Strycova on Thursday for a place in the women’s final of Wimbledon 2019.

Williams was far from perfect in her quarter-final draw, but her serving has progressed nicely, as she nearly doubled her ace output of the previous four rounds on Tuesday against Riske. She is now a step closer to her quest for a 24th Grand Slam victory.

It's fair to say @serenawilliams gave it everything to get to the semi-finals…#Wimbledon pic.twitter.com/IHtpbzcQ3z

The 37-year-old is up against the fierce Strycova after the Czech ended home favourite Johanna Konta in straight sets.

Despite her 0-3 lifetime record against Williams, Strycova might be able to cause problems if she can get into points and move the American around.

The Czech will also have to be tidy with her serve, perhaps tidier than she has been in her previous four matches. Strycova has been broken nine times so far in the tournament, but does lead all semi-finalists in percentage of service games won.

“If she serves well, you have really no chance to kind of return the serve,” Strycova said.

“I will just try to put as much as I can in because when we get to the rally, it’s good way for me. When she has a good day of serving, then I have really no chance to put some returns in. I have to just be focusing on my serve, not really on the return.”

This could be a very interesting contrast of styles, but if Strycova isn’t able to protect her serve as she alluded to, things could get away from her quickly.

At 33-years-old, Barbora Strycova is the oldest first-time major semifinalist in the Open Era, overtaking Roberta Vinci, who was 32-years-old when she advanced to the 2015 US Open semifinal and finished runner-up. #Wimbledon pic.twitter.com/DduuGWjh9r

There is no doubt that Williams is growing into the tournament, and she will not lack for confidence against Strycova given her 100 per cent record against the Czech.

The highest seed in the women’s draw, Simona Halep, will also get a chance to secure a spot in the women’s final on Saturday when she faces Elina Svitolina in the semi-final tomorrow.

Halep has never been past the semi-finals at Wimbledon and must face one more daunting obstacle to achieve this milestone.

The Romanian spoke up about her quarter-final win and how well she feels she is playing this year at Wimbledon, “I have energy, I feel fresh and confident and I am perhaps playing my best tennis on grass.”

Grass, I think I love you ❤️

When she was asked about her previous run to the semi-finals at Wimbledon in 2014, she responded with: “I’m a different person.”

“Everything changed. I have a lot of experience now. I’m more confident. I love grass. I think it’s a big challenge for me, next match. But I will take it like I took every match since I’m here. I’m relaxed. I’m happy. I’m motivated to win.”

Svitolina secured her place in the last four with a victory over Karolina Muchova. That win meant that the 24-year-old will play her first ever Grand Slam semi-finals.

The Ukranian could be motivated by another Grand Slam memory on Thursday. She blew a set and 5-1 lead before losing in the third set in the 2017 Roland Garros quarter-finals. The Ukrainian doesn’t want to remember the match, but reporters didn’t give her much of a chance on Tuesday where she responded with:

“We played also many times after that quarterfinal,”

“I don’t really want to think about that one because it didn’t go my way. It was quite long time ago now. … I think I’m a little bit different player now.”

The eighth seed has the edge over Halep going into the game. She was won four of their seven meetings on the WTA Tour and has claimed victory in three of their last four clashes.

The 24-year-old will provide a stiff test for the former world No.1 in what should be a closely-matched semi-final on Centre Court.