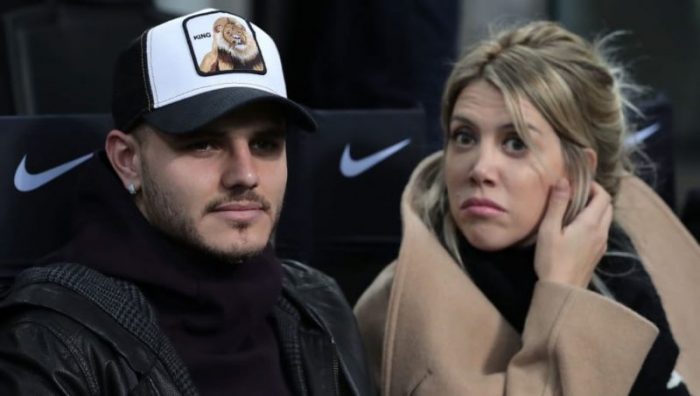 Mauro Icardi’s future in Milan is still quite unclear at the moment with the Nerazzurri having constant talks with him and his agent Wanda Nara to find an agreement.

The Argentine striker has not played a competitive match since February when he had the captain’s armband taken away and given to goalkeeper Samir Handanovic.

After a lot of indirect messages on Instagram from both Icardi and his wife and agent Wanda Nara, last week Inter announced a “cordial meeting” had been held between those concerned, including chief executive Giuseppe Marotta.

Wanda Nara, who is also a resident guest on popular Italian football broadcast show Tiki Taka, said on Sunday that her husband wants to stay at Inter and also confirmed that Icardi is out due to a knee injury.

This means that the former Inter captain is still in doubt of a place in the team ahead of next Sunday’s derby match against AC Milan.

Icardi was also not in the San Siro stands on Sunday as the Nerazzurri won 2-0 against Spal with goals from Matteo Politano and Roberto Gagliardini.

When asked about last week’s meeting and the future of her husband in Milan, Wanda Nara clarified everything immediately.

“Mauro wants to stay at Inter. I’m working to make him feel good and make peace with the club. We also chose a lawyer who’s an Inter fan!” Wanda Nara said.

“The derby? The knee problem isn’t an invention. He’s taking care of himself 24 hours a day. Health is his priority right now because maybe he doesn’t feel important for the team.

“Absent at San Siro against SPAL? We stayed at home with our family watching the game. It wasn’t because we were afraid of whistling. It was also something we agreed with the club. I talk to Marotta more than I do to Mauro right now to avoid any misunderstandings at a time like this.”

The controversy regarding the reason for Icardi’s absence from the team came after Inter had issued a statement on their official website saying that there were no injuries evidenced during tests to the Argentine’s knee.

Although at the moment it doesn’t seem that the Icardi saga will end soon, if the no.9 is reintegrated back with the rest of the team, it will surely boost Inter in their pursuit for a Champions League spot next season.

Inter are also considered one of the favorites to win this year’s UEFA Europa League title and Icardi’s reintegration could prove to be crucial in that sense as well.

Solskjaer speaks up about Manchester derby