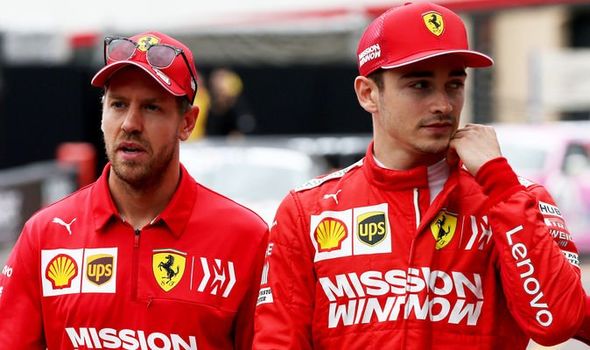 Charles Leclerc is showing the “killer instinct” required to be a Formula One champion, according to former Ferrari star Gerhard Berger.

Leclerc held off Valtteri Bottas and Lewis Hamilton in a tightly contested Italian Grand Prix to clinch his second successive victory, taking him above Ferrari team-mate Sebastian Vettel in the season standings.

The 21-year-old was also involved in a contentious qualifying session at Monza, as he ignored a team order to provide Vettel with a slipstream.

Berger believes Leclerc’s status as Ferrari’s current number one driver is no longer in doubt, saying four-time world champion Vettel must fight his own corner.

“Ferrari always attaches itself to the one who has the biggest opportunities and that is currently Charles,” Berger told Cologne newspaper Express.

“I must say it very clearly: there is no team play at this level in Formula One.

“I don’t know if he [Leclerc] fooled Vettel [in qualifying at Monza], but it’s been clear for a long time that Leclerc has an absolute killer instinct and is heading in the direction of the world title. He [Vettel] can never rely on Leclerc.”

Berger added: “It’s quite simple, if you lose your instincts, then you no longer have the claim to become world champion. You have to hone them again during the season.”

A champagne moment that @Charles_Leclerc and the tifosi will never forget 🍾 🙌#F1 #ItalianGP 🇮🇹 @Champagnecarbon pic.twitter.com/lJqxkolb08

Reigning champion Hamilton was frustrated by Leclerc’s robust defence of the lead at Monza, suggesting the new generation of drivers are treated with greater leniency, and Berger acknowledged the chances of the Ferrari golden boy receiving a penalty on the team’s home track were always slim.

“The goodwill issue for Ferrari at Monza cannot be overlooked. I agree,” he said. “Some gentlemen probably closed their eyes.”

While Leclerc was not penalised, Vettel was not so lucky, with the German receiving three points on his FIA Super Licence for unsafely joining the track, which caused a collision.

Vettel conceded he did not expect it would take so long for him to return to the track.

“Obviously I didn’t see anything,” Vettel told crash.net. “When I spun, I was looking the other way, I thought there was quite a bit of a gap. But then obviously you don’t start counting, so I knew there would be cars coming.

“But originally I thought it would be much quicker rejoining.”