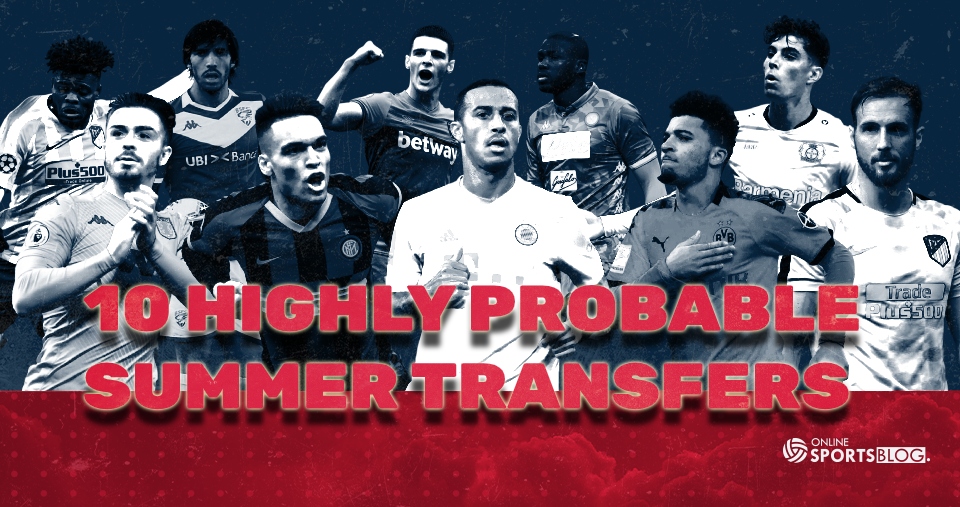 With leagues across Europe coming to an end, the Summer transfer window is fast approaching

It’s that time of the year again when you’re hoping your club makes the most of the Summer transfer window. It is expected to be a wary affair, with clubs careful about the financial instability caused due to the COVID-19 pandemic. However, clubs like Manchester United and Chelsea are expected to make big-money signings. Moreover, players like Jadon Sancho and Jan Oblak have been linked with moves away from their respective clubs.

Here are 10 players who will definitely pop up during the upcoming Summer transfer window:

It is no secret that Chelsea are on the lookout for a goalkeeper. The Blues had signed Kepa Arrizabalaga from Athletic Bilbao for €80 million in 2018. However, the Spaniard endured quite a poor season.

Recent reports have suggested that the club have highlighted Atletico Madrid shot-stopper, Jan Oblak, as an option. Oblak has produced world-class performances consistently for his club. As a result, the Slovenian is regarded as one of the best goalkeepers in the world.

The 27-year old will not come cheap. However, Atletico Madrid are reportedly demanding €120 million for the former Benfica man.

Oblak has been linked with a move to Manchester United in the past. Arrizabalaga, on the other hand, is attracting interest from Valencia. Also, Chelsea might consider other keepers from Ajax, Barcelona and even PSG.

Similar to Chelsea, Manchester City need centre-backs. John Stones has failed to develop as expected, while Nicolas Otamendi is no longer reliable. That leaves Aymeric Laporte and young Eric Garcia as Pep Guardiola’s only other options.

Kalidou Koulibaly is one name which has been linked persistently. The Senegal international has earned the reputation as one of the finest defenders in Italy. Koulibaly’s physicality and ball-playing ability earned rave reviews.

Napoli are said to be willing to deal for their star asset. But a hefty fee for the 29-year old will definitely be demanded. Manchester City are willing to pay up to €65 million. This is nowhere near the €100 million tag initially touted.

Kalidou Koulibaly's agent Fali Ramadani has had dinner with Aurelio De Laurentiis confirming the first concrete interest of #ManCity in the defender – and that City would not be willing to spend €75m, which the Napoli president wants.

Koulibaly has been linked with Manchester United, Chelsea and Paris Saint-Germain in the past. Moreover, Bournemouth’s Nathan Ake is another centre-back who has attracted interest from the Cityzens.

One rumour which refuses to go away is Thomas Partey to Arsenal. The Gunners said to be big fans of the midfielder and are reportedly willing to splurge money on him. With the London-based club looking for suitors for young midfielder Matteo Guendouzi, Arsenal potentially have a spot in midfield which needs to be filled.

Partey is an Atletico Madrid academy graduate. The Ghana international has been in fine form this season and has arguably been Atleti’s best midfielder. A defensive powerhouse, Partey has enhanced his reputation this season and could move on this summer.

Atletico Madrid are willing to let go of the player if the price is right; Partey has a release clause of €50 million in his contract.

Arsenal do not need to spend £43m on Thomas Partey. Although they will have to spend.https://t.co/VwcrjrpA5r

Chelsea have already begun their summer shopping, having already confirmed the signings of Hakim Ziyech and Timo Werner. But the club are targeting more players.

Bring him to the Bridge. 🔵 pic.twitter.com/DqDmnouQvT

Declan Rice is one such name. The former Chelsea academy player has been one of West Ham United’s best players, acting as a defensive midfielder. The England international produced excellent tackle and interception numbers this season and is capable of playing as a centre-back if needed. With Chelsea looking to sell Jorginho, on paper Rice would seamlessly slot into the No.6 position.

The 21-year old is also known to enjoy a good friendship with Mason Mount and that would help his settling-in process. West Ham United reportedly want in excess of £70 million for their star asset.

Manchester United and Tottenham Hotspur are other clubs that have shown an interest in Rice.

Regarded as one of the best young midfielders in Italy, Tonali has had an excellent first season in the top-flight with Brescia.

The 20-year old has been Brescia’s best player and looks ready to make the step-up. An excellent passer whose creativity stands out, Tonali has put up decent defensive numbers as well. Although he has been compared to Andrea Pirlo, both have disputed that claim.

With Brescia fighting relegation, Tonali won’t cost an arm and a leg. Inter Milan are leading the line for his signature and the Italian is set to cost around €50 million.

Tonali has previously been linked with a move to Juventus. Manchester United and Liverpool are also potential destinations for the youngster.

A transfer saga which looks set to last the entire transfer window, Lautaro Martinez to Barcelona has been going on for some time now.

Barcelona are in a precarious position financially and were not willing to activate the Argentina international’s €111 million release clause which expired a few weeks ago. However, the Catalan club have highlighted the striker as their primary transfer target for the summer and see him as the heir to Luis Suarez’s throne.

Latest rumours have reported that Barcelona would be willing to offer €70 million and Junior Firpo to Inter Milan, a deal which the Italians are considering.

The 22-year old has been linked with moves to Manchester City and Real Madrid as well.

Thiago has one year left in his contract with Bayern Munich and the influential midfielder has declined to sign a new one.

Regarded as one of the best midfielders in the world, Thiago has been a vital player for the Bundesliga giants. Aesthetically pleasing with exceptional dribbling ability, the Spain international has earned praise from across the world for his style of play.

However, the 29-year old wants a new challenge and has highlighted Liverpool as a potential destination. Talks are ongoing, but Bayern Munich are bracing themselves to let go of the midfield magician.

Apart from Liverpool, Manchester United, Manchester City and Arsenal are other Premier League clubs that have shown an interest. A return to Barcelona has been touted as well during the upcoming Summer transfer window.

Aston Villa are fighting relegation this season, and captain Jack Grealish has been their best player.

The England U-21 international has played in a variety of positions for his boyhood club. His creativity and attacking prowess have stood out, with his dribbling ability a nightmare for opposition defenders.

Grealish’s leadership skills have also been in full display, despite Villa’s position in the Premier League table this season.

Manchester United have shown a keen interest in bringing him to Old Trafford this summer and an £80 million move has been touted. Some reports suggest that the deal is already done.

Manchester City boss Pep Guardiola is also a fan of the 24-year-old. He expressed his admiration for Grealish’s talents before.

One of Bundesliga’s best and brightest, Bayer Leverkusen’s Kai Havertz looks set to leave the club after a spectacular season.

The German international is regarded as one of the best young players in the world. And we can see how his performances have justified the price tag. Havertz has operated in a number of positions this season, ranging from central midfield to striker and has been in fine form.

Chelsea are interested in him and have already begun negotiations with the German side for his signature. The 21-year old, for his part, wants to move to London as well. A fee of €80 million was touted initially before the Summer transfer window starts.

Chelsea will meet with Bayer Leverkusen bosses in the next few days to make the Kai Havertz deal perfect. Total fee will be around €70m plus €30m in performance related bonuses.

Leverkusen want Havertz to play in the Europa League for them first.

Real Madrid, Manchester United, Liverpool and Bayern Munich also conducted talks with the club. However, Chelsea are the ones leading the line to sign one of football’s brightest talents.

Another Bundesliga young player who could be on his way to England. Jadon Sancho has been one of Borussia Dortmund’s star players since he joined the club in 2017.

The England international has been suggested as a future Ballon d’Or winner by many and it is easy to see why. The winger has pace, trickery and final-third quality. Moreover, he had double figures for both assists and goals in the league this season.

Manchester United see Sancho as the solution to their long-existing right-wing problem. However, Borussia Dortmund want €120 million for their superstar. Hence, it will be interesting to see whether United pay that much in the end.

Manchester United will only pay Jadon Sancho's €120 million asking price if they qualify for the Champions League, according to Bild 👀 pic.twitter.com/fDZgUYDnha

Stay up-to-date with all the Transfer News in the upcoming Summer transfer window right here on OSB!