The Dutch winger has said he is not ruling out retiring from playing football as he nears Bayern Munich departure after 10 years at the club.

The 35-year old has been linked with numerous other clubs as his next destination but has said the ongoing injuries lately could force him to hang up his boots.

Robben has had numerous injuries throughout the last few seasons, which significantly constrained him from showing what he’s capable with the German side. Having said that, should he decide not to retire, the Dutch is still being linked to some important European sides including Inter and former club PSV.

🔴⚪ @ArjenRobben on his special relationship with the fans: "It's the best level of appreciation you can receive. Titles are one thing, but this almost means more to me." ❤️#FCBayern #MiaSanMia pic.twitter.com/qlhZD9ysjN

“I’m late in making a decision, but that has to do with my injury. I wanted to get back on the pitch and then think about my future,” Robben revealed to journalists on Tuesday.

“I hope to make a decision within one or two weeks, but I can’t promise anything.

“It’s not an easy choice to make. The whole package has to be right, not just in a footballing sense but also for my family.

Bayern Munich have confirmed Franck Ribery and Arjen Robben will leave the club this summer. These two legends were unstoppable in their prime.

“The easiest thing to do would be to stop. That is also an option for me, but I’m not sure whether I will do that.”

In recent weeks, Robben returned to action with Bayern where he managed to make his 700th professional appearance and could have a dream farewell by winning his eight Bundesliga title with the Germans if they had to avoid defeat against Eintracht Frankfurt on Saturday.

Joining Robben out of Bayern will be Ribery and Rafinha who are also leaving the Bundesliga side once this season is over. The 33-year old Brazilian says he treasures more the friendship he has had with his teammates over the titles they’ve achieved on the pitch. 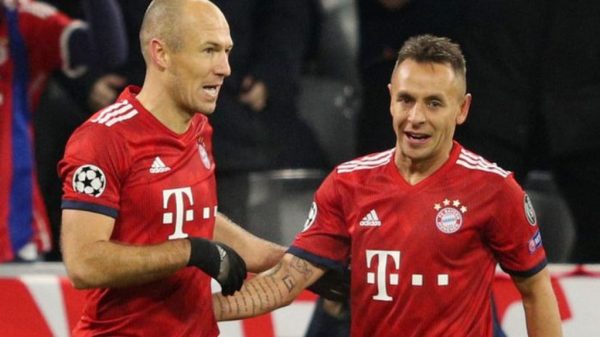 “We’ve been together for so long. That’s the most important. Not the last game or the last title,” Rafinha said.

“The friendship we have here is the most important thing. That’s why my mother said that I should say thank you for everything, to all employees and players. These people are very important to me.”

Is Maurizio Sarri’s time coming to an end at Chelsea?