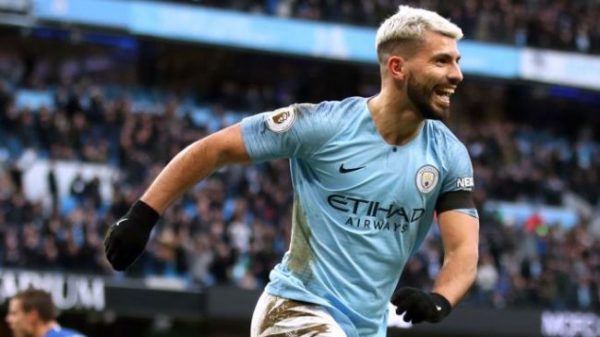 Sunday’s hat-trick against Chelsea was the 11th one for the Argentinian since he arrived in England eight years ago.

The Man City forward scored his second treble within a week having already netted three against Arsenal in the previous home fixture at the Etihad.

Prior to yesterday, it was Alan Shearer who held the record for most Premier League hat-tricks but the Argentine is in remarkable form at the moment and managed to equal the record.

The City number 10 opened his account with a stunning long-range shot past the Chelsea goalkeeper, nine minutes after Sterling scored City’s first goal.

Only six minutes later, Agüero made it 3-0 for City as he put another past Kepa Arrizabalaga with a first-time finish after an error from Ross Barkley.

After 25 minutes of play, it was already 4-0 for City as Gundogan scored the fourth with a low driven shot past the Spanish goalkeeper. But Agüero was not going to be satisfied with a brace and scored the third as City were awarded a penalty for a foul on Sterling in the second half.

Pep Guardiola awarded City’s all-time top goalscorer with a standing ovation from the crowd at the Etihad, having already secured the record.

Happy about the win, the hat-trick and for matching an all-times record. It's my honour and my pleasure to belong to this FC, with great companions, amazing fans, and being part of this wonderful team. C'mon, City!!! pic.twitter.com/BM17BmERe6

Apart from becoming the joint-top player for most hat-tricks with Alan Shearer, Agüero is ahead of some all-time greats to have played in England when it comes to the hat-trick tally.

In fact behind Agüero are Liverpool legend Robbie Fowler with nine hat-tricks, Thierry Henry, Harry Kane and Michael Owen all with eight and Wayne Rooney with seven.

With yesterday’s treble, the Argentine forward went on top of the Premier League goalscoring charts, together with Mohamed Salah, both with 17 goals to their name.

now the game is done, good result & hat trick, explain this pls @aguerosergiokun 😒 (also can we act like it never happened to me ?) pic.twitter.com/ooMqdwMMPQ

“He’s a player we depend on. Moments like the first goal, out of nothing he can put the ball in the top corner. Players like this you have to cherish them,” Sterling said on his teammate after the win.

With the win over Sarri’s Chelsea, City got back on top of the Premier League with 65 points together with Liverpool but ahead on goal difference. Guardiola’s side have one game in hand over the Reds.

10 reasons why LeBron James is the biggest athlete in the...