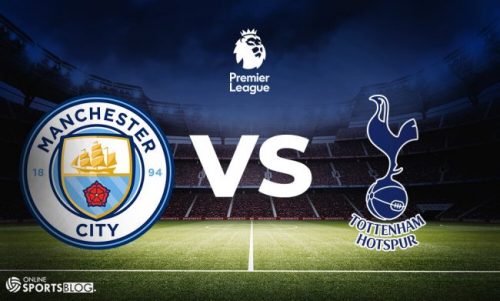 Guardiola’s side have a chance to get revenge over Tottenham after falling to the Spurs in the Champions League on Wednesday.

Pochettino’s side were victorious in the Champions League quarterfinal where they advanced thanks to the away goals rule with an aggregate score of 4-4. City will need a win if they want to get back above Liverpool in the Premier League table.

Tottenham are third behind City, with a 16-point gap too much for the Spurs to put any pressure over the Citizens even if they were to win once more tomorrow. Their battle is with Arsenal, Manchester United and Chelsea over a place in the Champions League next season.

Guardiola will have close to a full squad available with no suspensions to account for and just two injuries – Zinchenko and Bravo who is out with a long-term injury.

Ederson will be starting in goal and will have Kyle Walker at right-back and possibly Benjamin Mendy once more on the left. In the middle, it will be Laporte and one between Stones and Otamendi with the latter the most likely to get the nod.

In midfield, Fernandinho will take back his place starting lineup place and could be joined by De Bruyne and Gundogan to make up a great trio in the middle of the park.

The attack could be left intact with respect to the Champions League match, with Bernardo Silva starting at right wing, Aguero in the middle and man-in-form Raheem Sterling on the left.

The Spurs will have to do without both Harry Kane who damaged his ligaments last week and Moussa Sissoko who had to come off during yesterday’s match with a groin problem. In addition, Aurier and Dier are also both not available for the match.

At the back, Pochettino will likely start with Trippier and Rose at fullback positions while Davinson Sanchez, Toby Alderweireld and Jan Vertonghen are the three Spurs center-backs to start the match.

Wanyama, Dele Alli and Christian Eriksen will make up the midfield for the away side.

In absence of Harry Kane, Tottenham will have to start with Lucas Moura and Heung Min Son in attack with Llorente who could take part in due course.

In the remaining 34 matches, the result between the two was that of a draw.

Out of their last 5 fixtures, Manchester City only lost one and that was the first leg of the Champions League quarter-final at the Tottenham Hotspur Stadium. The remaining four were all convincing wins against Cardiff, Brighton, Crystal Palace, and Tottenham on Wednesday even though the last one was in vain.

As for Tottenham, they were able to win three but lost the other two, with the losses coming against Liverpool and against Manchester City which still gave them qualification to the semifinals on aggregate score. The wins were all at their new stadium against Crystal Palace, Manchester City, and Huddersfield last weekend.

We recommend you check out these odds for the Manchester City vs Tottenham match!

Odds are subject to change.

Can Ferrari claim win over Mercedes in Monaco?