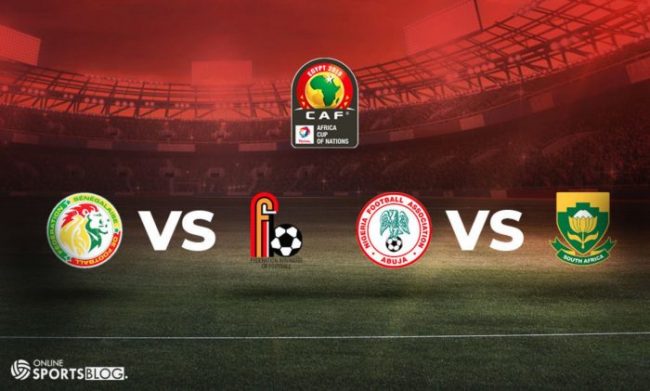 The big tournament in Africa began towards the end of June and is now approaching its end as the quarter-finals kick off today.

There already were some unexpected eliminations with those which stand out the most being of hosts Egypt who were shocked by South Africa in the last round.

Here’s what to expect from today’s matches:

The Lions of Teranga, Senegal, will be taking on the Squirrels of Benin in the first quarter-final match of the tournament.

The two sides who are yet to win a prestigious international trophy will be hoping they can advance through to the semi-final as they play each other at the 30 June Stadium.

Senegal will surely start as favourites to go through but they shouldn’t underestimate Benin at all, a side able to keep up with some of the biggest countries which include Cameroon, Ghana and Morocco.

‘‘We should give every team its right and respect Benin. There are no small teams in Africa, the quality is very similar. While we might be favourites on paper, papers don’t decide anything,’‘ said Senegal’s coach Aliou Cisse.

‘‘Our presence at this stage is not out luck, we worked hard and I believe in my players,’‘ argued Benin’s coach, Michel Dussuyer.

Senegal manager Aliou Cissé could start the same team for the third straight game on Wednesday.

Badou Ndiaye and Kalidou Koulibaly are a booking away from suspension.

Khaled Adenon was sent off in a shock last-16 win over Morocco and is now banned, but Benin do at least recover striker Steve Mounie from a ban here.

Senegal and Benin have never met in the AFCON before with the previous five meetings having been either friendlies or World Cup qualifiers.

Three of the encounters where friendlies and Senegal won all of them while the other two were World Cup qualifying matches back in 2000 with Senegal winning one of the matches and Benin managing a tie in the other.

This is considered one of the biggest rivalries in African football and they will meet in the Africa Cup of Nations in Cairo tonight.

Nigeria, who are three-time champions of the tournament take on South Africa who only won the title once, back in 1996.

The Super Eagles who overcame their nemesis Cameroon in the Round of 16 will be hoping to avoid the fate of hosts Egypt, who were upset by South Africa in the previous stage.

‘‘We’re preparing very well for the game because it will be very difficult and against a strong team,’‘ Nigeria’s star forward Odion Ighalo said ahead of the July 10 fixture at the Cairo International Stadium.

South Africa beat Nigeria away in their opening match of the AFCON qualifiers in June 2017 and were held 1-1 in the return fixture.

‘‘Nigeria is one of the best teams in the tournament and it’s going to be a difficult match,’‘ conceded South Africa’s coach, Stuart Baxter.

Nigeria manager Gernot Rohr is expected to start the same XI that beat Cameroon 3-2 in the thrilling last-16 contest in Alexandria on Saturday.

Stuart Baxter, head coach of South Africa, is not expected to make any changes to the team that shocked Egypt 1-0 in the round of 16.

That means Thembinkosi Lorch, who scored the goal against Egypt, will start despite the return of Themba Zwane from suspension.

Bongani Zungu, Sfiso Hlanti and Thulani Hlatshwayo must avoid a yellow card to be available for the semi-finals if South Africa progress.

In total, the two sides have met on 14 occasions, with the most recent meetings all favouring South Africa except for one, the friendly match in 2014 which Nigeria won 3-1.

Other than that, however, South Africa got positive results in the other encounters between the two.

Nigeria still lead the overall head-to-head record with seven wins whereas South Africa have only recorded two victories against Bafana Bafana. The other five matches ended in a draw.