According to club Oldham owner Abdallah Lemsagam, Manchester United legend Paul Scholes informed the club of his resignation via a text message.

The 44-year old only lasted a month in charge of the League two club and has since given reasons for his decision. He said he could not “operate as I intended and was led to believe prior to taking on the role”.

But the club owner Lemsagam has said he didn’t expect the former England international to take this kind of decision after giving Scholes “all the support and autonomy that he asked for”.

“I have been in Dubai over the last couple of weeks and was at ease knowing that he was in charge.

“I was very surprised as he simply resigned by text on Wednesday afternoon and has refused to discuss matters that influenced him to make his decision.

“Paul and I both agreed that there is potential but I reassured him that he had my full backing to rebuild the team of his choice next season.

“He did not raise any concerns at all about the team or any other matters informally or formally, prior to his resignation. He gave no opportunity or indications that he needed to address any issues at all,” the Oldham owner said. 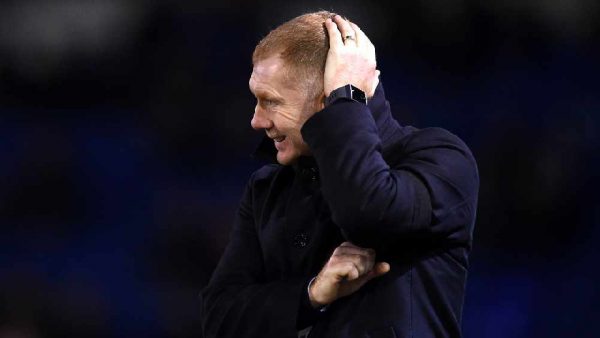 Scholes’ first job as a manager began with the Latics exactly a month ago and only won only one of the seven matches in charge of the League Two side.

When the United legend took over Oldham, they were 14th in the table and nine points away from a play-offs position.

The former Red Devils midfielder said that deciding to leave Oldham was a decision made with “great regret”.

Oldham owner, Lemsagam continued about Scholes’s situation at the club when he was still in charge of the team.

“I personally was always supportive of any decisions Paul made or consulted me on, reassuring him that he was the man in charge.

“I continued to encourage him despite the results and reassured him that his job was secure. I was content to remain in League Two this season and working with the team we have for the remainder of this season is important.

“Management is a difficult job and both myself and everyone at the club would have worked with Paul to find solutions, had we been given the chance.”

Next up for Oldham Athletic is fifth-placed Tranmere Rovers on Saturday.