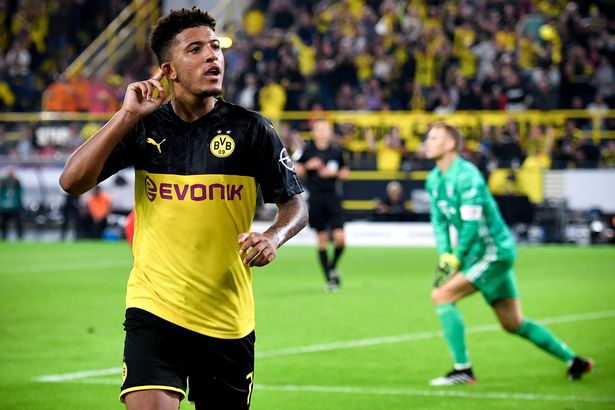 Borussia Dortmund’s English rising star has found an agreement for a new contract worth a staggering £190k per week.

The 19-year old forward had a brilliant 2018/19 season and will be hoping he can replicate that this season. He left Manchester City and joined Dortmund in 2017.

Sancho also made his international debut with England last October.

According to The Mail, the forward youngster has agreed terms on a deal which will see him earn almost £10 million per year.

Dortmund have gone all out to tie down their star player following interest from elite clubs across Europe.

Man Utd and PSG have both showed an interest in Sancho, but he has opted to extend his stay in the Bundesliga.

Dortmund chief executive Hans-Joachim Watzke previously revealed the club rejected an approach from a big side at the end of last season.

Watzke told Ruhr Nachrichten: “A chief of one of the super clubs asked me back in spring if there was a chance to sign Sancho but I told him straight away he should forget about it and he never contacted me again.”

Sancho’s previous deal was due to run until 2022, but Dortmund moved quickly to fend off interest from elsewhere and boost the youngsters £75,000-per-week wages.

He was in impressive form for the Bundesliga runners-up last campaign, scoring 13 times and providing 15 assists.

However despite his commitment to Dortmund, Watzke previously admitted he was aware that Sancho would not be around forever.

“There aren’t many 19-year-olds with such a potential,” he said.

“He is also not a player from the region or one who would have any connection to it.

“When you have a player like Jadon Sancho, you must reassess the situation every single year. Everything else would not be honest.

“If a foreign player is not convinced that the club is right for him at the exact time, it just does not make any sense to keep him.”

Naby Keita out for the rest of the season