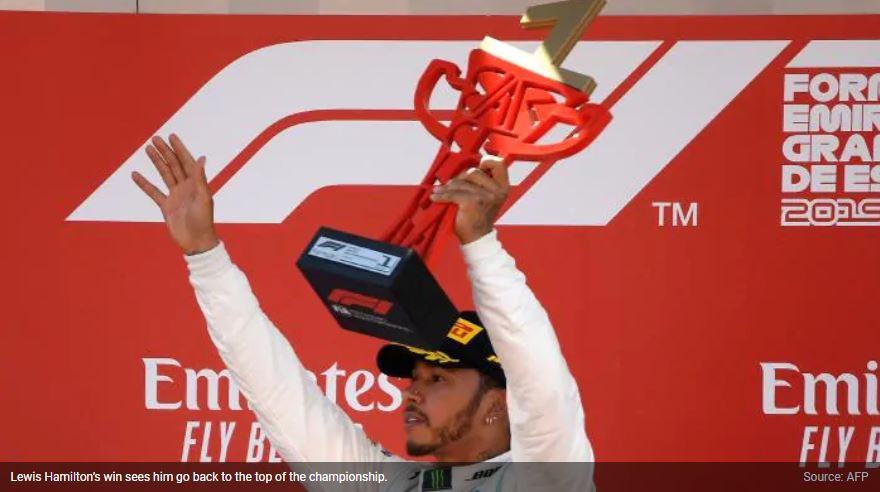 A dramatic start to the #SpanishGP, as @LewisHamilton muscles his way to the front

It got VERY tight down there 👀 😯#F1 🇪🇸 pic.twitter.com/vtTvBUUHcW

Lewis Hamilton beats Valtteri Bottas after jumping him at the start

Lewis Hamilton retook the lead of the championship with 26 pA 49th 1-2 finish for Mercedes.

“I just have to put it down to this incredible team,” Hamilton said after the race. “This is history in the making, to have five 1-2s. I am very, very proud of that. It has definitely been a bit of hard first four races.

It was an interesting start. I saw the red car go around the back of the both of us. I had no idea whether they were further ahead and I knew Valtteri would be braking super deep.

I was trying to keep the tires warm. I had not had a fastest lap all year so it was about time.”

Hamilton, who also claimed the fastest lap bonus point for the first time, leads Bottas by eight points in the standings in what is quickly developing into a two-horse race.

Daniel Ricciardo did manage to finish only his second race of the season after a frustrating battle for ninth and 10th saw him miss out on the points and finish 12th, just ahead of his teammate Nico Hulkenberg.

The two cars made contact and Grosjean was also overtaken by McLaren’s Carlos Sainz and Toro Rosso’s Daniil Kvyat and finished 10th.

The next F1 race will be taking place in Monaco – a track where Mercedes have not won for the last two years. But given how they looked in the final sector in Spain they have to be favourites.