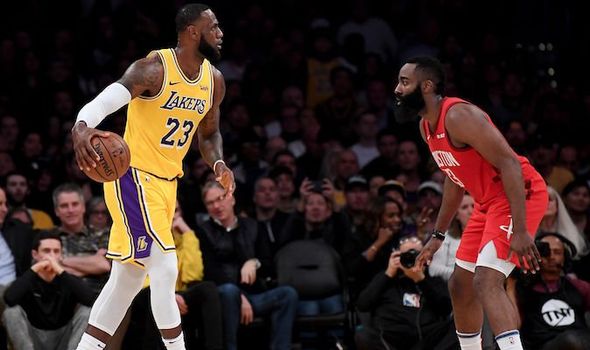 The Lakers fought back from a 19-point deficit to stun the Rockets at the Staples Center. LeBron had 29 points and 11 rebounds for the Lakers who avoided their second-ever season sweep against the Rockets as they finished with a 111-106 win on Thursday night.

The Lakers trailed most of the game and were down 95-88 with 7:49 remaining when they went on a 17-4 run over a six-minute span. James, who scored eight points during the run gave Los Angeles a 99-97 lead with 4:15 remaining. They went on to lead by as many as eight in the final minute – making it the Lakers’ sixth comeback victory.

The win sees them improve to 28-29 on the season, now just two and a half games behind the eighth-seeded Los Angeles Clippers in the Western Conference.

Brandon Ingram had 27 points and 13 rebounds for the Lakers, while Kyle Kuzma put in 18 of his own. Reggie Bullock had 14 points and JaVale McGee finished with 11 as all five starters scored in double figures for Los Angeles.

Harden got into early foul trouble before finished with 30 points for his 32nd consecutive 30-point game. The NBA’s leading scorer at 36.6 points per game entering the night, Harden fouled out with 1:24 left and Houston trailing 105-99.

Paul had 23 points, 10 rebounds and nine assists, and Capela had 12 points and 11 rebounds in his return after missing 15 games due to a thumb injury.