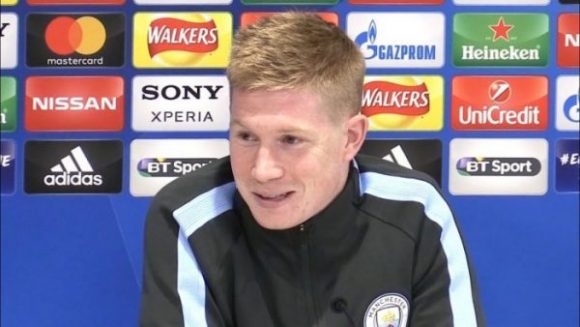 The Belgian superstar doesn’t think the new Spurs stadium will have any impact on Tuesday’s Champions League quarter-final showdown.

Tottenham made their debut in the new £1 billion state-of-the-art stadium against Crystal Palace last week and tomorrow’s match will be the first Champions League fixture played at their new home.

But De Bruyne is more concerned about the quality of the players including Harry Kane, Christian Eriksen and Dele Alli rather than about the stadium in which the match will be played.

“I don’t think there will be any difference. They’ll probably be a little bit more excited but in the end, it’s a stadium with supporters.

On Saturday, Pep Guardiola’s side made it to the FA Cup final after beating Brighton and Hove Albion 1-0 and will now face Watford at Wembley next month in the final.

City are one of the few teams left with a chance to complete the quadruple this season given they are still with a chance to win all titles they’re in with the Champions League quarter-final still to be played, the Premier League first place still not decided and the FA Cup final scheduled for next month.

Who's excited about Tottenham's new stadium?

However, both Guardiola and De Bruyne himself thinks the possibility of completing the quadruple remains “almost impossible”.

“There’s no point thinking about it. Do you know how heavy the schedule is?” De Bruyne said.

“I think people underestimate how the fixtures come that quickly. You can’t think about it. We don’t even have time to have a rest ourselves so how can we think about what’s going to happen in four weeks?

“We’re just going to play Tuesday and then hopefully play a good game.”

Last year, City were not able to overcome Liverpool in the Champions League quarter-final as they lost 5-1 to Liverpool on aggregate but De Bruyne says it doesn’t make a difference and that this year is different.

When asked whether they learned a lesson, he responded: “Nothing. Different team, different year, different players.

“Last year we had a great season, we didn’t make it beyond the quarter-finals and that’s it.”