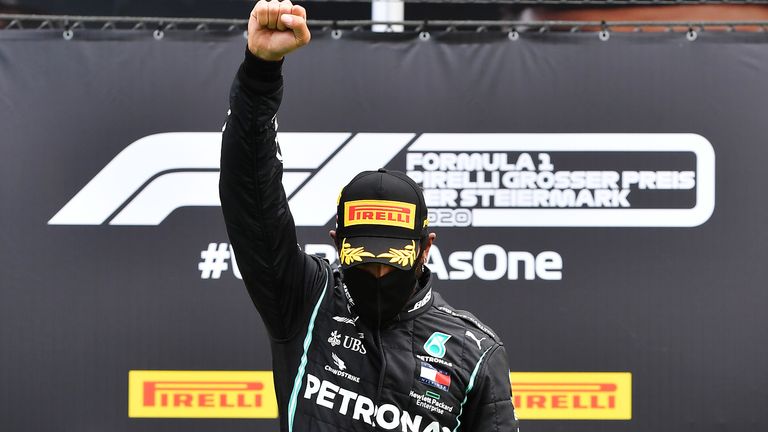 Gestures against racism have become more prevalent throughout the world

The Formula One’s only Black driver also took a knee on the starting grid with some of the other drivers. He also was seen wearing a T-shirt with “Black Lives Matter” on the front last Sunday.

“We stand together and fight,” he said after posting on Instagram a picture of himself. The Brit made the headlines for making the gesture on the Spielberg podium after collecting the 85th winner’s trophy of his F1 career.

“The team today took the knee which was just amazing to see that together we can learn, be open-minded and conscious of what’s going on in the world.”

We stand together and fight✊🏾 the team today took the knee which was just amazing to see that together we can learn, be open minded and conscious of what’s going on in the world. Today we won but we have a long way to go. Thank you so much to everyone in my team, here at the track and back at the factory. I hope you are proud of what we are standing for and achieving together. A huge thanks to all of you #TeamLH, I appreciate all of your support and your positive messages, you’ve really kept me going 🙏🏾 #StillWeRise

Where is all began…

The clenched fist gesture echoed that of sprinters Tommie Smith and John Carlos on the podium at the 1968 Mexico City Olympics. The two sprinters had won the gold and bronze medals respectively in the 200-meter running event. While on the podium, Smith and Carlos turned to face the US flag and then kept their hands raised until the anthem had finished. Both men had been kicked off the US team and sent home after their famous black-gloved protest.

Colin Kaepernick’s was the one to set off a wave of controversy. His infamous knee gesture before one of San Francisco 49ers games during the 2016 season raised many eyebrows. While others stood during the National Anthem, Kaepernick chose to kneel as a protest against the knee that “pressures, chokes and silences”.

Georginio Wijnaldum had given a powerful anti-racism gesture last year when he ran to the cameras on the touchline. The Dutchman held out his arm next to his teammate and pointed to the colours of their skin.

The Liverpool FC midfielder not only captained his home country’s team in the absence of Virgil van Dijk, but went on to score his first international hat-trick in a 5-0 win over Estonia.

Following the death of George Floyd in the United States, a series of protests had erupted around the world. This set of a cascade of events whereby many governing bodies took to the stage to support the movement.

The Premier League has shown solidarity to the players affected by racial abuse. As the season restarted, the name of each player was replaced with the ‘Black Lives Matter’ slogan. A ‘BLM’ badge will also be featured on all shirts for the rest of the season. Racism was the talking point in recent years within the Premier League as online abuse had stirred news headlines.

Amid the nationwide anti-racism demonstrations sparked by the death of George Floyd, Bubba Wallace, a NASCAR driver, was also subject to abuse. The sport’s single top circuit black American driver had successfully pushed to ban Confederate flags. A noose was found hanging in Wallace’s garage which forced the 26-year-old to make a bold gesture.

The sporting world continues to use its platform to stand up against acts of racism. These anti-racism gestures – both big and small – matter more than ever now.