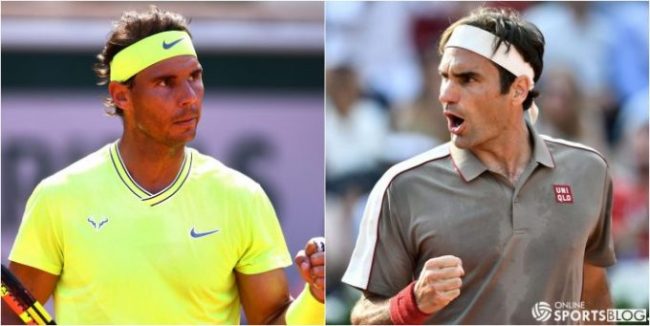 Federer and Nadal will be going head-to-head for the 39th time in their careers as they play in Paris on Friday.

It’s the Swiss’ first participation in the red clay Grand Slam since 2015 and he managed to make it to the semi-final after a superb win against compatriot Stan Wawrinka on Tuesday.

This will be his first semi-final in seven years at the French Open.

Nadal leads the head-to-head with Federer overall with 23 wins against the Swiss’ 15 victories. In Paris, the Spaniard is yet to lose against Federer with the last win dating back to 2011 in the final of the same tournament.

Last time Federer beat Nadal on clay was 10 years ago in the final of the Madrid Open.

“Against any player, there is always a chance,” said Federer. “And that’s exactly what everybody believes by facing Rafa. They know it’s going to be tough. But you just never know.

“He might have a problem. He might be sick. You might be playing great or for some reason, he’s struggling. Maybe there’s incredible wind, rain, ten rain delays. You just don’t know. That’s why you need to put yourself in that position.”

Thanks to a commanding win over Nishikori, Rafael Nadal will meet Roger Federer in the #RG19 semi-finals.

The 37-year-old added: “For me to get to Rafa is not simple. It took five matches here for me to win to get there.

“I knew that when I signed up for the clay that hopefully, that’s going to happen. If I would have had a different mindset to avoid him, then I should not have played the clay. So I think by that mindset, I think it helped me to play so well so far this tournament.

“You have to be fearless to some extent to take on the spinney balls, the sliding balls, the kicking balls, and that’s what I will do on Friday.”

Nadal thumped Kei Nishikori 6-1, 6-1, 6-3 to set up the semi-final clash with Roger Federer and the Spaniard said he is excited to meet the Swiss once more.

Roger Federer and Rafael Nadal will renew their storied rivalry in the French Open semifinals.

“For me, the main thing is being in the semi-final. The way that I have been playing has been very positive,” Nadal said.

“Of course having Roger in front in the semi-finals is an extra thing. We shared the most important moments of our careers together on the court facing each other.

“So it’s another episode of this, and I’m happy for that and excited. It will be a special moment, and let’s try to be ready for it.”