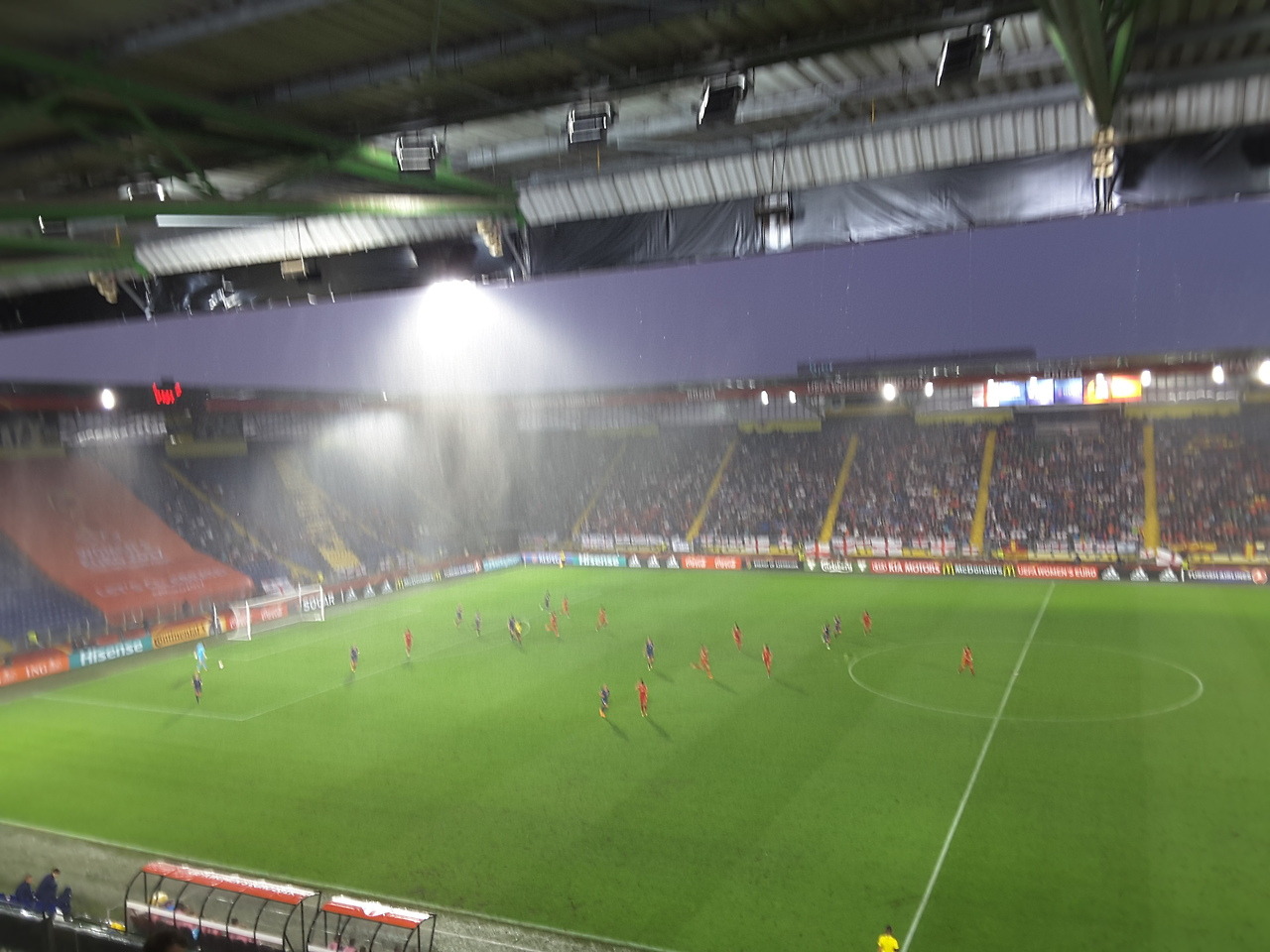 England do Scotland a favour…

Forget about Stoke! England have managed to beat Spain on a cold and rainy night in Breda! Having destroyed rivals Scotland in their first Group D game in the Women’s EURO 2017, England came head to head with Spain. England manager Mark Sampson proved his worth. Although Spain dominated possession, they very generally contained by the Lionesses in difficult conditions. Following her hat-trick against Scotland, Jodie Taylor was once again on hand to secure victory for England. With this win, England are all but through to the knockout stages, whilst Scotland will live to fight another day! Offside call sets the stage for a tight game

Mark Sampson kept faith in the eleven who started against Scotland. This is the first time he has done so in the 55 games since he took over in 2013. Spain only made one change from the team that beat Portugal 2-0. Marta Corredera replaced Mariona Caldenty.

Spain almost scored in the first minute. Barcelona’s Victoria Losada took advantage of a slip by captain Steph Houghton. However, she sent the ball flying wide of the England goal from 15 yards out. Just a few seconds later, and England took the lead!

As the players were still finding their feet, Ellen White picked up a loose ball in the Spain half. She pushed forward creating space. White spotted Chelsea’s Fran Kirby pushing forward alongside her. She gave her teammate an excellent through pass. Kirby rushed towards goal, and as she came face to face with keeper Sandra Paños, she hit lovely disguised finish towards the first post. 1-0 for England after just 1 minute and 37 seconds! England found the net again on the 5 minute mark. Jordan Nobbs delivered a freekick into the Spanish area. Millie Bright rose above all to loop a header over Paños on the far post. A superb header, and 2-0 England! But, just as we thought that England were set to run away with this match as they did against Scotland, the euphoria was short lived. The flag went up for an offside call that was debatable to say the least. The game remained 1-0.

Houghton could have scored for England after 11 minutes. Kirby took a short corner, crossing dangerously across goal. A poor clearance fell to Houghton, who hit the ball high from 15 yards.

Tiki-taka all over again!

Following these two let-offs, Spain started to compose themselves more. They kept most of the possession, and showed signs of the tiki-taka style that we have been accustomed to seeing their male counterparts use. Despite the pouring rain making it difficult to move the ball around, Spain continued to pass the ball flowingly.

Spain enjoyed 76% of the possession. However, the Lionesses remained unfazed by their opponents’ passing game. In fact, Karen Bardsley barely had a significant save to make in the first half. Spain kept pushing forward, but could not penetrate a stubborn English back line. England relied on their composure not to allow their opponents in, and relied a lot on catching Spain off guard to counter.

7 minutes into the half, and Kirby almost picked up a loose ball in the Spain area. Paños rushed out to clear the ball into touch. Spain stuck to their game plan, patiently waiting for an English slip-up. Their patience was almost rewarded on the hour mark. Lucy Bronze hit a loose square pass straight to Losada. The Spaniard hit the ball quickly to Amanda Sampedro, who in turn passed to Alexia Putellas. Her long-range shot came off Bright, and the danger was cleared.

On 63 minutes, Spain appealed for a penalty. Silvia Meseguer looped a pass towards Jennifer Hermoso. Bardsley came off her line, misjudging the bounce, and barely managed to get a hand on the ball. As she followed through, she made contact with Hermoso. The referee was right to dismiss the protests.

With a quarter of an hour remaining, the referee pointed to the spot. Spain delivered the ball into the England area. White slipped as she went to clear. The ball came off of her foot, and hit her arm. Penalty to Spain! As the Spanish supporters celebrated, the referee reversed her decision, indicating that the ball came of White’s leg. She was most probably assisted by the lineswoman. In the final 5 minutes, Taylor was once again the hero for England! Spain lost the ball at the back. Demi Stokes passed into Nobbs. Her attempted flick took out the Spanish defence. It fell for Taylor at the edge of the box. Taylor kept her calm, and lifted the ball coolly over an onrushing Paños.

The final whistle blew. Taylor proved vital once again, and goes down in history as the first English player to hit the net four times in the EUROs. For the first time in their history, England won their first two matches in any major tournament. There is no doubting England’s fighting spirit, and with Sampson’s tactical genius, the sky is the limit for this England team! The Lionesses now only need a draw against Portugal to qualify as group winners, probably avoiding France in the quarter-finals in the process.

Portugal come out on top against Scotland

In the earlier match, Portugal benefitted from some poor defending to beat Scotland and claim their first win of the tournament. After 27 minutes, Carolina Mendes took advantage of a Vaila Barsley mistake. Barsley missed a simple clearance, to allow Mendes to finish off unchallenged.

Youngster Erin Cuthbert came off the bench to curl in an equalizing goal for Scotland. However, their joy was short-lived. Ana Leite broke free of her opponent to put Portugal ahead once again, just two minutes after she was introduced to the game.

Despite the defeat, England’s win against Spain means that the Scots still have a slight chance of progressing. Scotland must beat Spain by two goals on Thursday, and need another favour from England. They need the Lionesses to beat Portugal. This would put Scotland, Spain and Portugal level on 3 points. Since the goals in the teams’ respective matches against England would not come into play, Scotland would qualify on superior goal difference among the three tied teams.