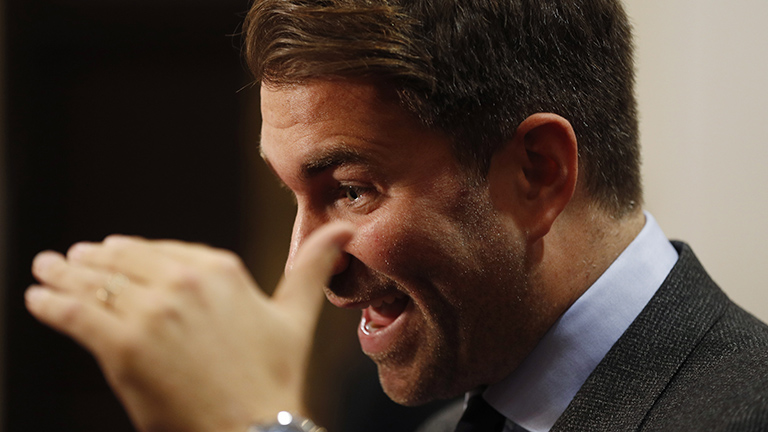 Eddie Hearn has had enough of Joshua-Wilder negotiations

Eddie Hearn’s patience has finally run out as talks over a mega fight with Joshua continue to drag on. The British promoter labelled Wilder negotiations a ‘fucking waste of time’ and claimed that nobody knows who the American heavyweight is.

The mega-fight between Wilder and Joshua has been under negotiations for over a year, and Hearn has finally cracked explaining he’s too busy for time-wasters.

When asked by IFL TV about Deontay Wilder saying he deserves a 60/40 split in his favour to fight Anthony Joshua, Hearn flatly called Wilder an idiot.

“I’m sick and tired of idiots out there who thinks he wants the fight. How stupid do you have to be to think Deontay Wilder wants this fight? Just listen to what he’s saying.

“‘I want 60/40,” Hearn mocked. “Fuck off, mate. You ain’t earn $3 million bucks. Fucks sake… You could walk up any city, any high street, any town in the world and ask anyone who Deontay Wilder is — no one’s got a fucking clue!”

“He ain’t even gonna do 300 [thousand] buys on pay-per-view [against Tyson Fury], on Showtime. You want 60/40 [against Joshua]? Idiot. Fucking, don’t waste our time. Don’t use Joshua’s name to try and gain profile and publicity.

“Maybe he’s just saying it, I don’t know, but if that’s what he really thinks, please don’t waste my fucking time. I’m really fucking busy…no time for time-wasters…It’s just so, so draining.”