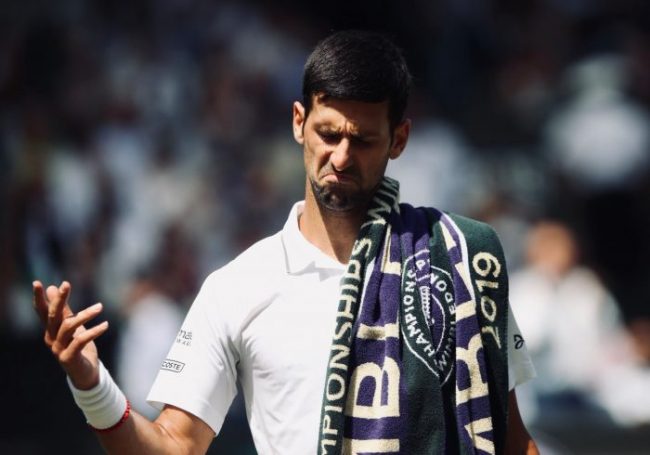 Defending champion Novak Djokovic made it to yet another final at the All England Tennis Club after winning against Roberto Bautista Agut.

The Serb world number one started the match strongly after taking the first set 6-2 without any problems. Bautista Agut seemed a bit nervous in the beginning and maybe couldn’t control his emotions in the first set.

However, in the second set, it probably was exactly what the Spaniard needed when he managed 11 winners, just 5 unforced errors and had a 93% first serve points won.

“Of course I will watch it! I’m a fan of that match-up as well. Federer vs Nadal is one of the most epic rivalries of all time so it is fantastic to see them play today”@DjokerNole will be keeping a close eye on the second semi-final…#Wimbledon pic.twitter.com/zoKbX6LqEB

Djokovic now knew he had a fight on his hands, having complimented his opponent for the fightback, but he was struggling to keep his composure, constantly murmuring some words probably aimed at his box in the stands.

But soon into the start of the third set, the Serb started playing some simply outstanding shots to snatch the break in the sixth game of the third set and take the match to what proved to be the last set of the match.

Bautista Agut did his best to bounce back, including hanging on in a 45-shot rally – the longest of the tournament – before Djokovic finished with a classy forehand.

Now he had reached top gear. there was no one who could stop him apart from Djokovic himself. After a 10-minute opening game, Bautista Agut held onto his serve but his optimism was short-lived as Djokovic raced through the fourth set with some unstoppable shots down the line.

Despite needing five match points to seal the victory, Djokovic was comfortable in the end as he lapped up the applause. Despite some scares throughout the match, the gladiator from Belgrade managed to fight on and now targets a 16th Grand Slam title.

He will be facing either Rafael Nadal or Roger Federer who are in action on Centre Court just in a few minutes time.