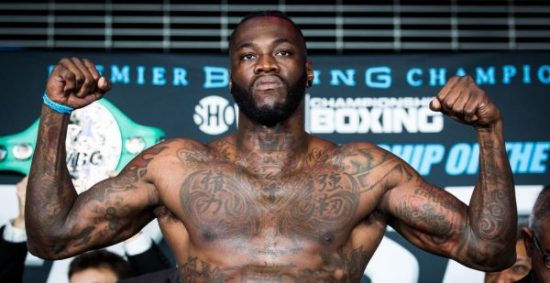 It will be a massive heavyweight showdown between Deontay Wilder and Anthony Joshua between two of the greatest boxers at the moment.

Wilder says he “can’t wait” for the fight with Joshua which will be one of the most watched fights in heavyweight history.

The American boxer will be fighting to defend his WBC title against Dominic Breazeale on May 18 as Joshua fights Jarell “Big Baby” Miller in an attempt to retain his IBF, WBA and WBO gold belts on June 1.

The fight between Wilder and Joshua has been stalled on many occasions in the past but many think if it had to happen in the coming months, it will set up what would be one of the biggest fights in the history of the sport.

When Wilder was informed about how Joshua wanted to take him on in the ring, the American said: “Oh man, I can’t wait for him either.

“I feel the same way about him that I do Breazeale.

“Four months of negotiations and they knew they didn’t want the fight. Stop. What more do I have to do for people?

“I’ve tried to show people and I’ll continue to still prove that I am the best. I’ll continue to give people the fights that they want to see. But they got to be in cooperation with my team as well too.

Deontay Wilder has had A LOT to say about Anthony Joshua 👀 pic.twitter.com/rZ5UPfXhyq

“Because fighters, I understand, they have choices. They have a choice to make whether to get in there with the man, the myth and the legend.

Joshua’s promoter Eddie Hearn said last week that there was “a clear desire from both sides to make the fight”.

F1: Could Verstappen be the biggest threat to Hamilton this season?