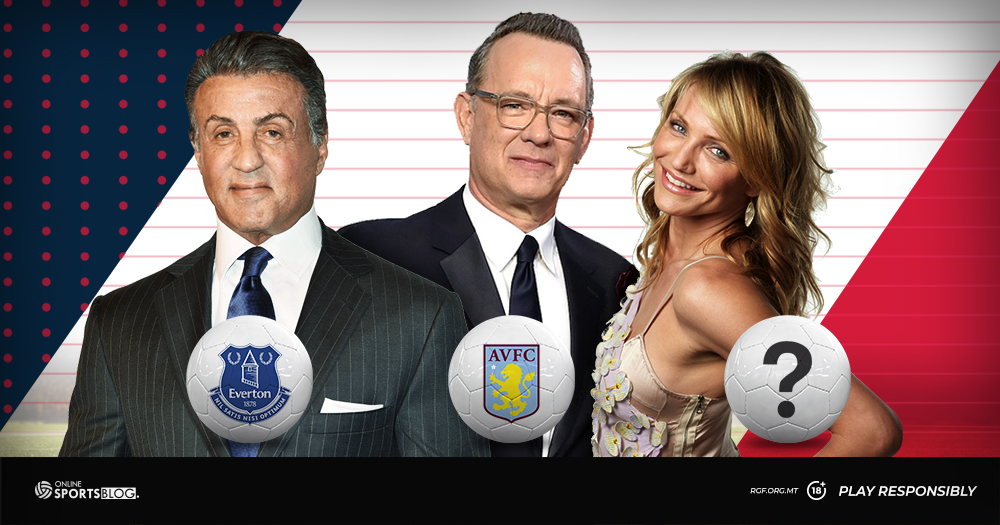 Football is certainly the most popular out of all sports around the world. It is quite inevitable for famous figures not to involve themselves in the sport. Some times, a celebrities’ football club of preference is chosen based on huge negotiations made as part of sponsorship deals.

Hollywood great Tom Hanks, for instance, can be considered the most famous Aston Villa fan worldwide. Other celebrities like Sylvester Stallone and Justin Bieber are also very famous football enthusiasts.

While going through Online Sports Blog’s list, we’re sure you’ll be surprised at each one of these celebrities’ football club!

The famous “Rocky” and “Rambo” actor is an Everton supporter. Stallone even visited Goodison Park for a football match back in 2007.

One would wonder, “how come?” and it’s actually quite simple. Sylvester Stallone is, in fact, a friend of former Everton club director and shareholder Robert Earl.

Maybe an unexpected match-up but Cameron Diaz actually happens to be a Brentford Football Club admirer. Having mentioned the Championship club in the past, former chairman Dan Tana had made sure everyone gets to know of the link between Diaz and Brentford.

The allegiance was in fact confirmed by Tana himself when he stated: “Cameron is a regular and she’s always on the Griffin Park terraces whenever she’s in London.”

As an American and a loyal supporter of her nation, Taylor Swift is a known supporter of the US Women’s National Team.

Following the 2015 World Cup triumph for the USWMNT, the Pennsylvania-born singer had invited the whole squad to join her on stage during one of her concerts.

Tom Hanks, who is one of the biggest movie celebrities of all time, is a football enthusiast. However, no one would have guessed the club most at heart for Hanks. He is a supporter of none other than Premier League side Aston Villa.

In the past, the “Forrest Gump” actor admitted that the only reason for his admiration towards Villa is because the team name sounded “pleasant”. Aston Villa acknowledged the allegiance from Hanks and also invited the actor for a match against Portland Timbers a few years ago.

On several occasions, his father has been asked whether he has a favourite football club. There were also rumours of an Arsenal allegiance in the past. One time Donald Trump replied to Piers Morgan about supporting Arsenal with: “Not particularly, no.” However, he went on to say: “I have a friend who owns Manchester United.”

Even if football is not on top of your interests, there must be some kind of admiration if you spend almost £120 million on a football club. Right? That’s what Alibaba founder and China’s second-richest man Jack Ma did back in 2014.

In 2014, Jack Ma bought 50% Guangzhou Evergrande, China’s most successful football club for £120M, joking that he might rename it Jack Ma FC pic.twitter.com/qMvgFGpHqp

Canada-born rapper Drake is surely one of the biggest celebrities in the music industry. Over the years, he’s also expressed his interest for football. The American rapper has a soft spot for several football clubs all over the world with Manchester United as his favourite club. The Premier League side is one of the most common on the list of favourite celebrities’ football club.

In fact, he also referenced former Manchester United striker Ruud van Nistelrooy in one of his songs “The Presentation”. The music industry giant is regularly spotted in United gear which confirms his admiration for the Red Devils.

Maybe the strangest combination on the list is the one with Kim Kardashian and Merseyside club Liverpool. In fact, Kim once let slip of a Snapchat pic with the Reds boss showing on TV in the background.

Following the leaked picture, rumours started spreading about the link between the  Kardashians and the Premier League club. We actually think there is something going one between the Kardashian family and the Reds.