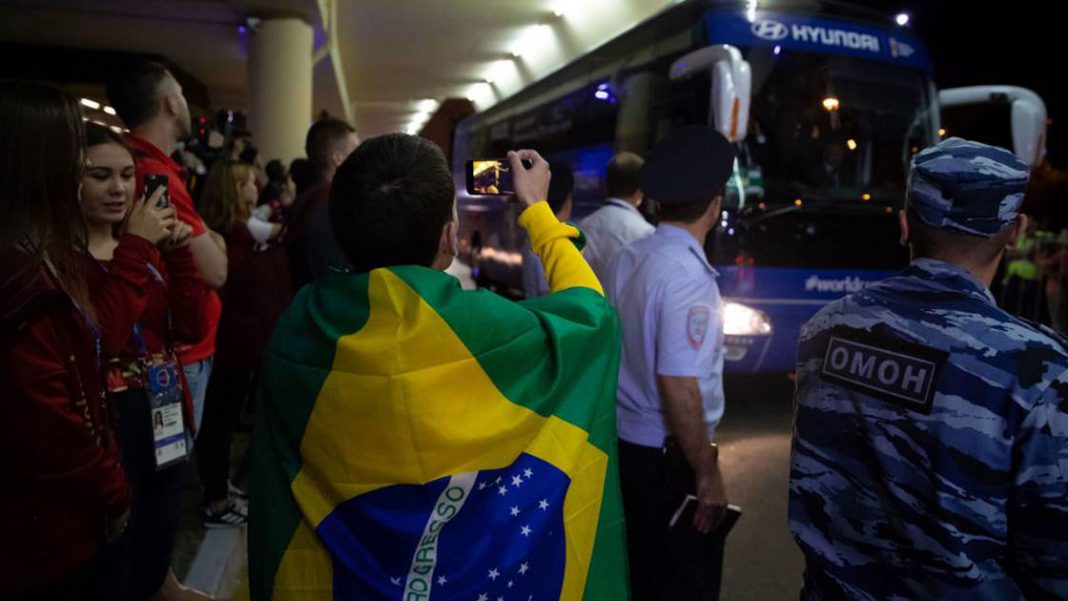 Neymar, the world’s most expensive player, joined fellow stars Lionel Messi of Argentina and Portugal’s Cristiano Ronaldo on Russian soil as the clocks ticks down to the first match of the FIFA World Cup tournament between hosts Russia and Saudi Arabia.

He arrived with his team Brazil where seems to have recovered from his broken foot injury which he had sustained in the PSG shirt last February.

Brazil seem determined to restore faith in their national team after the humiliation they endured in their 7-1 defeat against the Germans in the previous World Cup on home soil. They begin their quest to stack up their sixth World Cup as they landed in the early hours in Sochi, the Black Sea resort where they will be based, fresh from beating Austria 3-0 in their final warm-up match.

Neymar boosted the Brazilians’ confidence after he marked his first start in more than three months by scoring in Vienna. It was Neymar’s 55th goal in a Brazil shirt, allowing him to draw level with Romario on his country’s list of all-time leading scorers — only Pele and Ronaldo have more goals for their country. The 26-year-old had come off the bench to score in last weekend’s 2-0 win over Croatia in Liverpool, his first appearance since his injury.

“I don’t know Neymar’s limits,” Brazil coach Tite said. “His technical and creative capacity is impressive. When we get him in the last third of the field he is lethal.” Brazil start their campaign against Switzerland in Rostov-on-Don on Sunday.

The big question mark still hangs over the participation of Egypt’s star player Mohammed Salah. He is still recovering from his shoulder injury he had suffered after clashing with Sergio Ramos in the Champions League Final in May.

Egypt are depending on their talisman striker as they try to get past the first stage of a World Cup for the first time.

The Egyptians arrived in Russia on Sunday, after Salah attended their final training session in Cairo on Saturday without taking part — he restricted himself to briefly dribbling the ball.

“The team is ready for the competition and morale is high,” national team manager Ihab Leheta told AFP at the airport in Grozny, where Egypt are basing themselves.

Cristiano Ronaldo trained with Portugal on Sunday, as the European champions held their first World Cup training session at the team’s base in Kratovo, southeast of Moscow, five days ahead of their major opening clash against Spain in Sochi on Friday.

Sochi is one of the 11 host cities of the tournament and will welcome four games of the group stage, one round of 16 game and one of the quarter-finals.

The European champions play Spain in the 2014 Winter Olympics host city Sochi in the opening match for both nations on Friday.

France in need of a confidence boost

France, boasting a lethal attack featuring Antoine Griezmann and Kylian Mbappe in an attack-minded squad, also arrived in Russia, seeking to win their second World Cup 20 years after their 1998 triumph.

Despite their impressive resources, France looked flat in a 1-1 draw against the United States in Lyon on Saturday.

Before Thursday’s kickoff, the football world will focus on choosing the host of the 2026 World Cup between a joint bid featuring the United States, Canada and Mexico and underdogs Morocco.

FIFA member states will vote on the issue at their congress on Wednesday.

FOUR Famous footballers who chose to play for another country!