Anthony Joshua has arrived in Saudi Arabia ahead of his bout with Ruiz. The former holder of the heavyweight titles has promised an incredible night on 7th December.

After suffering the first shock loss of his professional career, Joshua will be coming in strong to reclaim the IBF, WBA, and WBO heavyweight titles.

🗣"When I beat him, I want everyone to bow to my feet." 🔙🔛🔝 @anthonyfjoshua attempts to regain his world titles in an epic rematch with @Andy_destroyer1 in Saudi Arabia on Dec 7 💥

Anthony Joshua’s record currently stands at 22-1 after his loss to Andy Ruiz earlier this year.

He’s only been the distance once, against Joseph Parker in 2018, with 21 of his 22 wins ending by knockout, as well his only loss.

Joshua has recently sported a much leaner physique, having shed pounds of muscle in a bid to be more agile for quick-handed Ruiz.

AJ also claims to have learned from his mistakes from June as he looks to get back to winning ways.

“It’s going to be an incredible night and I’m thrilled so many of my fans are going to be there, particularly from the United Kingdom,” said Joshua.

“It’ll definitely be a night people will tell their grandchildren they were at, one of those iconic evenings of boxing. Everyone from Saudi has been brilliant to work with.”

The first heavyweight world title fight will be held in the Middle East, dubbed the ‘Clash On The Dunes’. It will take place in the custom-built 15,000 seat Diriyah Arena in the heart of the UNESCO World Heritage site known as the home of heroes and kings.

Despite being knocked out in their first meeting, Joshua is the big betting favourite at odds 1.33 to win.

Meanwhile, Ruiz is at odds 3 to retain the heavyweight titles. 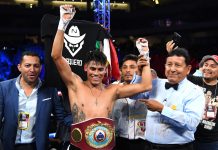 Man Gets Beaten With Putter On Course