Some of the best moments in the yearly football calendar include those from the Africa Cup of Nations i.e AFCON. The competition is held every two years but this will change for this year.

The next tournament was set to be hosted by Cameroon in January and February of 2021.

However, the Confederation of African Football announced yesterday that the African football competition has been postponed to January 2022. The main factor for this decision is the ongoing Covid-19 pandemic.

To make up for the sad decision of having the tournament postponed we thought we’d gather some of the AFCON best moments since its start in 1957.

From Zambia’s heroics in 2012 to South Africa’s immediate impact on their tournament debut and Victor Ikpeba’s unbelievably disallowed penalty in the 2000 AFCON final.

No one expected Congo to even qualify for the 1972 AFCON edition. Let alone that they could go on to write one of the best success stories in the sport. 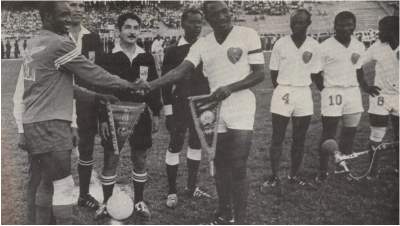 Their run at the tournament was characterized by luck but also great courage when facing the favourites to win the title. In the final, they faced Mali who had a very strong squad. Moussa Diakhite, Moussa Traore and Fantamandy Keita were some of the big names in to take part in that final.

Considering the expectations surrounding them prior to the start of the tournament, this was a huge thing for the nation of Congo. Let’s admit it, we never say no to an underdog story of this sort.

Any player in charge of taking a penalty can surely confirm the pressure there is in the moments leading to the shot. Sometimes the pressure takes over and it could lead to a heartbreaking loss for the whole nation.

That is not what happened with Ivory Coast when they faced Ghana in the 1992 AFCON final. It’s listed in history as one of the most nail-biting endings to a competitive football final match.

Ivory Coast, led by Yeo Martial, went on to beat Ghana after winning an epic penalty shootout 11-10. For the neutrals, it surely was a thrilling moment to experience. On the other hand, we’re sure the Ghana fans would have preferred a different outcome.

We’ve witnessed some unbelievable goalline controversies in the past and this also includes the penalty ruled out for Nigeria in 2000. The setting is the 2000 AFCON final and it was to be decided through a penalty shootout.

At 3-2 in favour of Cameroon, Nigeria forward Viktor Ikpeba was next in line to take the penalty. It was here when match official Mourad Daami ruled that the ball had not crossed the line when it did so by about a yard.

This controversial decision led to Nigeria losing the title as Rigobert Song then proved decisive to seal it for Cameroon.

What qualifies this as one of the AFCON best moments in years is the fact that Zambia went into this tournament labelled with numerous disappointments in the preceding years.

Led by Hervé Renard, the Copper Bullets gradually advanced in the competition and made it all the way to the final. They faced Ivory Coast who had some very big names in world football. These include Didier Drogba, Kolo and Yaya Toure, Salomon Kalou and Gervinho among others.

Like many other endings to a cup final, this one was to be decided by a penalty shootout. It was here that the nerve of the Zambia players was tested. At 7-7, Kolo Toure missed just like Zambia’s Kabala did a few moments after.

However, what practically gave Zambia the title was the miss from Gervinho in the next penalty. It was then in the hands of Sunzu to win the title for his country and that’s what he did. That surely marked the biggest moment in history for the Zambian national football team.

South Africa’s history in AFCON isn’t one to boast about given the numerous disappointments they’ve had over the years. However, this cannot be said for their 1996 participation in the tournament.

As hosts of the tournament, expectations were high for Bafana Bafana despite having never played an AFCON match before then. To everyone’s surprise, however, Clive Barker’s team made it to the final that year. They took on Tunisia in their challenge for the title.

They only needed a Mark Williams brace late in the second half to seal the win for Bafana Bafana. What made it special was the huge 80,000 crowd at the FNB Stadium who witnessed their country’s only AFCON success in history.

Next: Best free agent footballers up for grabs this summer

Premier League Most Saves and Clean Sheets so far!